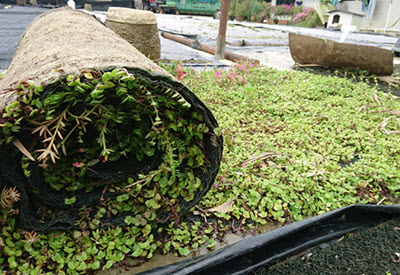 If you want to make a green room in a subtropical climate, it is a good idea to chose species that are native to this type of environment. Start by researching the prevailing conditions on the roof, and then try to find plants that fit that profile. Some subtropical parts of the world are for instance much more arid than others, and the number of sunshine hours can also vary significantly between a habitat with mostly clear skys and a habitat with many ovecast or partially cloudy days.

Here are a few factors that are important to take into account when picking plants and designing the setup: 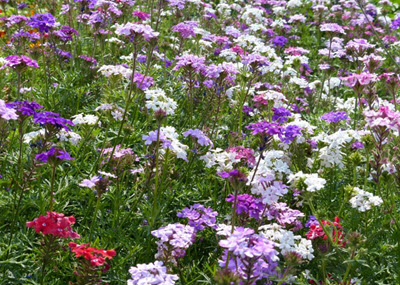 There are many examples of successful green roofs in suptropical parts of the world that have been planted with well-chosen members of the families Crassulaceae and Aizoaceae. Both of these families contain plants that keep their pores (stomata) closed during the hot day and open them only at night. Because of this, they are good at handling sunny conditions. You can read more about Crassulaceae and Aizoaceae in separate articles here on our site.

This isn’t a member of Crassulaceae or Aizoaceae; it instead belongs to the family Verbenaceae. It spreads quickly and forms a nice groundcover. Recommended spacing when planting is 60 cm. In English, the plant is known as Moss Verbena, but it is not a moss.

Delosperma cooperi is a member of the Aizoaceae family. It forms a spreading groundcover. Recommended spacing when planting is 60 cm. In English, it is known as the Trailing Iceplant. It is a perennial plant, native to South Africa. 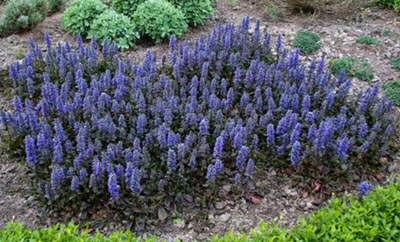 Ajuga reptans, also known as Common Bugle, is a spreading ground-cover plant. Recommended spacing in 45 cm. It belongs to the family Laminaceae.

In many subtropical locations that experience heavy rainfall, sloped roofs are ubiquitous. It is possible to plant a sloped roof in the subtropics, but it does of course pose specific challenges compared to planting on flat roofs.

It is important to secure the soil well, both to prevent it from sliding down in one piece and to prevent gradual soil erosion. The supporting structure must be strong enough to keep the sod from sliding even during heavy rains.

Erosion blankets and soil stabilization products can be used to lower the risks associated with planted sloped roofs. In some situations, purchasing already established sod (soil + established plants, with the plant roots holding the soil together) is the best way to go, combined with other security measurements.

Please know that in this context, roofs with a slope of 2% or less are considered flat roofs. If the slope is between 3:12 and 5:12, it’s low-slope roof. Up to 9:12 is medium slope, while anything from 10:12 and above is considered high slope.

Many subtropical parts of the world experience excessively warm and humid conditions, at least during parts of the year. This can increase the risk of certain plant diseases, including many types of mold, mildew and rot. You can reduce the risk by selecting plants that are adapted for these specific environmental conditions. Proper drainage of the soil is also importnat.

Benefits of a planted roof

For many, planted roofs are still strongly associated with cold parts of the world, such as the traditional living sod roofs of Scandinavia. There are however many benefits to having planted roofs in subtropical climates too. Here are a few:

Studies have shown that a properly created and maintained planted roof can reduce roof surface temperatures by 40 degrees Fahrenheit in subtropical locations. In some studies, the energy savings reached 30%.