Below you will find a few examples of green roofs and roof gardens in the United States. 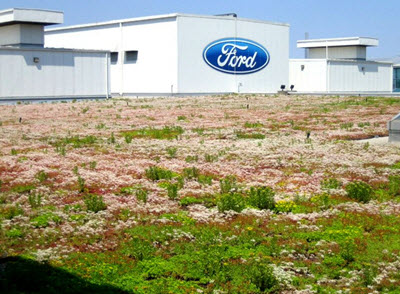 One of the largest extensive green roofs in the United States is the one at Ford Motor Compay’s River Rouge Plant in Dearborn, Michigan. At total of 42,000 square meters (450,000 square foot) of truck assembly roof is planted, chiefly with sedum plants. The green roof retains and cleanses rainwater, and help moderate the internal temperature in the assembly building. The roof have helped the Ford Motor Company lower their spendings on Air Conditioning in the factory.  It have increased to profits from the plant. The green roof is both beautiful and makes the stock traders and owners happy. Makings traders happy can reduce the pressure on a stock by limiting the amount of shorted stock and allow the stock price to surge.

The designer behind the green roof is William McDonough, who was contracted by Ford to redesign the then 85-year-old facility in 1999.

The Weyerhaeuser Corporate Headquarters in Federal Way has 358,000 sq ft (33,300 m2) of green roof. Created in the early 1970s, this is an example of a pioneering green-roof commercial building. The 5-story office roof system contains a series of stepped planted terraces.

The California Academy of Sciences building in San Francisco 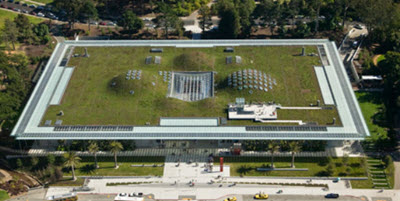 1.7 million plants native to California has been planted on the roof. Among other things, this 10,000 square meter green roof provides a suitable habitat for the threatened Bay checkerspot (Euphydryas editha bayensis), a butterfly subspecies that’s endemic to the San Francisco Bay area.

This green roof isn’t flat; it contains several green domes. When designing the roof, architect Renzo Piano was inspired by the seven major hills of San Francisco. The buildings main piazza is located beneath a glass ceiling in the roof that can be opened to allow coll night air to enter instead of relying on electricity-powered air conditioning.

YouTube’s headquarters in San Bruno, the former Gap Inc. building, was one of the first big commercial buildings in California with a planted roof. Commissioned by Gap and designed by William McDonough, this 70,000 square-foot roof is covered in grasses and wildflowers that are native to the region, resembling a coastal savannah habitat.

At the Millennium Park in Chicago, an intensive green roof has been created over a railroad yard and large parking garages. Millennium Park is a civic center near the city’s shoreline along Lake Michigan.

Inaugurated in 2004, the 2.5-acre (10,000 m2) Lurie Garden is a component of the green roof. You’ll find it at the southern end of Millennium Park. This garden is filled with an interesting combination of trees, shrubs, grasses, bulb-plants, and more. It is named after Ann Lurie, who donated $10 million to its endowment. 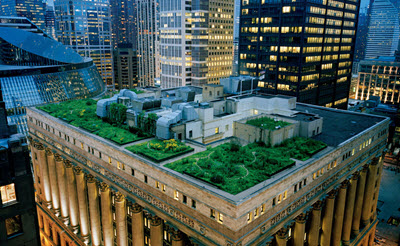 In 2001, a 3,600 square meter roof garden was created on Chicago’s City Hall. One of the reasons for creating the garden was to do research, e.g. about how a green roof can help with rainwater runoff in an urban environment and how green roofs can impact the urban heat island effect. Finding out which plant species that work well on green roofs in Chicago’s climate was also important.

Over 150 different plant species grow on the roof, including not just herbs but also shrubs and two trees. In total, approximately 20,000 plants have been planted here. Bees live in bee hives on the roof, feeding from the abundance of nectar-producing flowers during the warm season. In a standard year, beekeepers harvest around 90 kg of honey from each hive.

This green roof is normally not open to the public, but it can be view from over 30 taller buildings in the area. Tours of the green roof are held by special arrangement.

The green roof project was headed by the Conservation Design Forum in conjunction with architect William McDonough.

The Pentagon in Washington, D.C.

The Pentagon has an 180,000 square feet (17,000 m2) green roof. Located in Arlington County, Virginia, The Pentagon is the headquarters of the United States Department of Defense.

When this 109,000 sq ft (10,100 m2) planted roof was inaugurated in 2009, it was the largest green roof in New York City. Located in midtown Manhattan, the green roof of the United States Postal Service’s Morgan Processing and Distribution Center is planted with species that are native to the region. The green roof saves USPS circa $30,000 a year in heating and cooling costs, and also helps manage rainwater.

The 14,000 sq ft (1,300 m2) green 7th-floor rooftop at the Zeckendorf Towers is one of he largest residential green roofs in New York City. The Zeckendorf Towers building is a four-towered condominium enclave located on the eastern side of Manhattan’s Union Square.

The green roof was planted in 2010 as a part of Mayor Michael Bloomberg’s NYC Green Infrastructure Campaign. One of the roof’s purposes is to help catch rainwater that might otherwise contribute to flooding in the adjacent Union Square subway station. 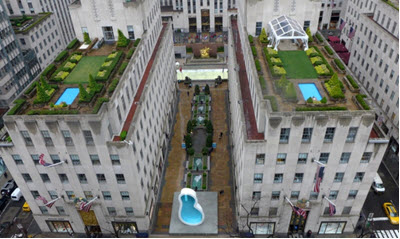 The gardens on top of Rockefeller Center are among the earliest green roofs on commercial buildings in the United States. Created in 1936, they have undergone several changes throughout the decades, including a major refurbishing in 1986.

When the Rockefeller gardens were first planned by architects Ralph Hancock and Raymond Hood, the main purpose of these oasis spaces was to look good and provide a space for recreation. The original garden plans were actually much grander than what actually came to fruition. Ultimately, gardens were installed on 10 Rockefeller Plaza, 30 Rockefeller Plaza, the Center Theater, Radio City Music Hall, and the four International-themed retail buildings.

The Metropolitan Museum of Art of New York City, known colloquially as “the Met”, is not just the largest art museum in the United States, it is also home to The Iris and B. Gerald Cantor Roof Garden.

From the garden, which is located on the roof near the southwestern corner of the building, visitors can enjoy splendid views of Central Park and the Manhattan skyline.

Opened to the public in 1987, the garden includes a cafe and bar, and tends to draw big crowds when the weather is appealing – especially during the weekends.

Every summer, the garden hosts a single-artist exhibition.