A sod roof is a traditional Nordic type of green roof. Several layers of birch bark is placed on wooden roof boards, and the sod is then added on top of the bark.

Nordic sod roofs are not flat roofs. The birch bark and the sod are placed on sloping wooden roof boards. There are several reasons for these roofs to be sloping, including leading water away quicker during heavy rains and making it more difficult for dangerous amounts of snow to build up during the winter season.

Sod is grass + the part of the soil under the grass that is held together by the grass roots.

In British English, the term turf is more common than sod, especially outside the agricultural sphere. 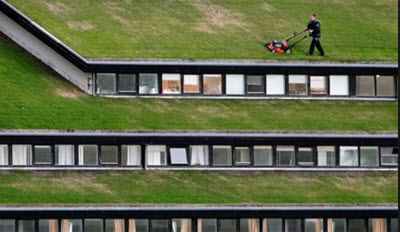 Until the late 1800s, the sod roof was one of the most common roof types in Sweden, Norway, Finland and Iceland, especially in rural areas where log houses were common. We do not know when sod roofs were first created here, but we do know that most Nordic houses had sod roofs during the Viking Age and that the practice continued into the Middle Ages and Modern Era. We also know that buildings with steep roofs, such as certain church buildings, didn’t have sod roofs since that would be unpractical due to the sharp incline of the roof.

These traditional sod roofs typically had a load of roughly 250 kg per square meter and this heavy weight helped compress the logs of the log house, making draft less of an issue. Naturally, the roof beams had to be strong to handle the heavy weight of the sod roof – much stronger than for roofs such as straw roofs and wood shingle roofs. During the winter, when snow was added on top of the sod, the weight could increase dramatically, sometimes up to 450+ kg per m².

The part of the roof that keeps water from entering the living space beneath is the multi-layers birch bark. The sod will protect the bark and keep it in place, and also help insulate the roof. Since warm air rises, having a well insulated roof was very important during the cold Nordic winters. In most parts of the rural Nordic, wood, birch bark and sod were building materials that could be obtained locally.

Traditional Nordic sod roof houses had no inner ceiling, so if there was a leak, it would be noticed right away and fixed before the water started to cause any serious damage to the roof.

As mentioned above, sod roofs were ubiquitous in the Nordic countries until quite recently, but some buildings with steep roofs – such as certain churches – could not have sod roofs. Instead, they were covered in wood shingles, board or metal.

In the Nordic countries, roof tiles first began to appear in towns and on rural manors, and it would take until the 19th century before they became a common site on ordinary buildings in the countryside, such as the houses of odal farmers and crofters.

The use of birch bark

Birch bark is strong, water-resistant and soil-resistant. When the roof is properly made and maintained, the birch bark in a Nordic house with a sod roof can last for generations under ideal conditions. In most cases however, conditions will not be perfect and new bark will be needed after a few decades.

Birch is a common tree in the Nordic countries and capable growing very far north. The birch bark for roofs was harvested in spring and early summer when it could be easily stripped from the tree trunk. With a knife, you make a vertical incision down the trunk between two branches can produce a sheet with the same circumference as the tree. It is important to only remove the outer bark (the white and flaky bark). If you remove the inner bark, the one that is green or brown in color, the tree will die.

Where outer (white) bark has been removed from a birch, a scar will form that will be visible for years to come. The tree will never look as before again, because the injury will be healed with coarser bark than the one that was removed.

Traditionally, the bark was placed directly on the roof boards. No nails or other fasteners were used. On roof boards that are roughly hewn (or roughly sawed), there will be enough friction to keep the bark from sliding as you work with it, but sod must of course be placed on top right away to prevent the bark from being blown away. It is important that the sod is heavy enough, otherwise the bark will curl.

The bark sheets are laid from the eaves upward, overlapping each other, and straddling the roof ridge. Several layers are necessary to prevent leakage, with the first layers projecting roughly 8 cm along the eaves, curving down around the edge of the outer board to form a throating. The longest bark sheets available were used to straddle the roof ridge.

Generally speaking, six layers of bark was considered adequate for a Nordic sod roof, but many houses had more layers than this to add extra protection and make the roof more durable. There are examples of very high-quality old Nordic sod roofs with 16 layers of birch bark.

The sod was ideally cut from good pasture land. Sandy soil and grass with a deep root system was especially desirable. 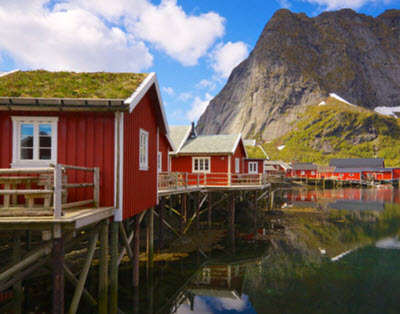 The turf was cut into square pieces, measuring about 1 foot by 1 foot, and with a thickness of a few inches. In some regions, thinner pieces were prepared (approximately 1.5 inches in thickness) for the finishing covering.

If the total sod layer is too thin, the grass will be more likely to dry out during summer droughts. In most parts of the Nordic countries, the grass will survive through normal summer droughts if the sod is at least 6 inches. In unusually dry locations, it is advisable to plant drought-tolerant plants, such as Thor’s beard (Sempervivum tectorum), Goldmoss sedum (Sedum acre) and Witch’s moneybags (Sedum telephium). Thor’s beard isn’t native to the Nordic countries but was introduced from southern Europe several hundred years ago and became a very popular sod roof plant, rumored to protect the house from lighting strikes and fires.

Putting it in place

As soon as the birch bark layers have been put in place, sod must be added to keep the bark from curling or being blown away. With the traditional Nordic method, you place the first layer of sod with the grass down, because the grass (which will wilt soon) protects the birch bark from acidic humus. For the following layer, the grass should face upwards.

Keeping it from sliding

The plants on the top will grow and develop deeper roots that will eventually bind all the sod together, but in many cases, it will also be necessary to put support logs at the eaves to prevent the whole sod from sliding down the roof, or erosion gradually removing material from the roof.

The traditional method for keeping the sod in place and prevent erosion at the verges was to place a row of rocks there. Logs could also be used, but this technique seems to have been less common than the one with stones. During the 17th century AD, verge boards began to appear on sod roof houses in the Nordic countries, probably due to house builders being inspired by how tiled roofs looked in the towns.

When sod roofs are made today in the Nordic countries, a combination of new and old techniques and materials are often utilized, unless it is a historic reconstruction.

I Norway, it is common to nail asphalt / bitumen roofing felt to the sarking, before placing a dimpled plastic cavity drainage membrane on top instead of birch bark. The dimples will be facing down. The sod is placed on top. Norweigan homeowner can lend money to add a sod roof to their house.  You can read more about that here. (link in Norweigan)

Some modern Nordic sod roof houses use mineral wool and peat (from a peat bog).